You are here: Home » Patient Experience » Cerebral Palsy- A cause of Plight and Unite

Cerebral Palsy- A cause of Plight and Unite

Cerebral palsy in simple terms is a disorder of the brain that is caused due to damage to the developing fetal or infant brain. If you are in search of an article listing the types and classes of cerebral palsy then you are probably on the wrong page. This article is merely a recollection of an incident in my life that I feel is worth sharing.

The incident in question is relating to one little “Hanny” (Name changed for obvious reasons and bears no resemblance to the actual name).

Hanny is a 14-year-old kid with cerebral palsy. Not the kind that makes you walk slightly awkwardly and gives you a faint stutter as you speak, but the worst kind of cerebral palsy. Hanny is dependent on a tube to feed him, a brace to support his head and needs a small hoist to lift him off the bed to be put in his chair.

In all honesty my first meeting with Hanny was pretty normal. It was morning rounds and I was last to walk into his room as I was fiddling to fit into ‘small’ sized gloves. The room was dimly lit and on one side of the bed there was a tablet playing sounds from the sea, very soothing indeed. On the other end of the bed lay a lamp, which made the ceiling look like the starry sky on a cloudless night.

Hanny took no notice of us entering the room and kept gazing at the ceiling with a vacant expression. We made some generic conversation with Mum and were on our way before I could finish my untidy scribble in his notes.

It was a chilly December night and I started my shift with the usual handover from the day on-call Doctor. There was a small mention that Hanny had a spike of fever and will need bloods if this continues. I settled on for the night and made myself some nice strong coffee.

While I was sipping my coffee and catching up on some paperwork my bleep went off. I may be digressing a little but if you have been a Doctor long enough you will agree that the sound of the bleep becomes the single most annoying sound in your life- a band of bawling babies probably wont bother you as much as this single prehistoric chime.

I strutted lazily towards the ward and was greeted by an anxious nurse who was obsessing over Hanny’s respiratory rate and temperature. This was the night that I was to learn never to take a Nurse’s intuition lightly.

I listened patiently and advised an O2 sat monitor some bloods, and a Chest X-ray. To be honest I had dealt with similar conditions in the past and knew what I was doing. I subsequently started him on some oxygen to be ‘safe’.

While I sat next to his bed, I started making small talk with Mum and asked for a brief recap of Hanny’s life. I observed her as she gave a recollection of every single event that had caused a hospitalization and recounted the drugs that he was on and daily dosages- with enough precision to put senior pharmacists to shame.

Mum was barely in her mid thirties, but looked as mature as a 60 year old. She had dark circles around her eyes and her curly blond hair was slightly disheveled.

As I proceeded to examine him she helped me move him around and warned me about what he liked and what he didn’t. When I tried to check for a pupillary response, she casually mentioned that they were “not sure” if he was blind or not. I finished the exam in autopilot and sat in my chair next to his bed- this time in silence.

A series of vile thoughts crossed my mind as I brooded. The child could barely see, he was bed bound and needed support 24/7 to keep him alive. And then I thought of the young woman in her mid thirties and what his existence had done to her life. In retrospect, these thoughts still ignite a deep sense of shame and I feel that I deserved what happened next.

What happened next could very aptly be compared to a flash of lightening. Hanny chose to test me with a seizure, a choking sound from his pharynx and a drop in O2 sat to 66%. My mouth called for the nurses and my mind shouted profanities strictly on the vulgar side!

The stars can align to give you success, but what is more important to know is that they can align to make your life hell just as well!

The Crash team was engaged and I was practically on my own. The adrenaline kicked in and I started him on maximum concentration of oxygen with the aid of a Bag and mask. 20 minutes and half a liter of perspiration later Hanny was doing well and I was feeling proud of myself. I was his personal human CPAP machine and he kind-of liked it. He was to be shifted to a High dependency unit ASAP.

All through the episode the Mum remained calm and helped me when she could. As Hanny settled she excused herself probably to have a small weep in private. I watched her leave with a newfound respect for the young lady and her nerves of steel. Now Hanny decided to have some tachycardia and I jumped to my feet again. This time the nurses came to my rescue and said  “That is normal, he doesn’t like it when mum is away!”

I had a brief blank moment and then I could see it very clearly. Once Mum was back Hanny lazily turned his head to my side and I could swear that I saw him give me a cheeky grin. In a short span of 20 minutes Hanny had managed to make me see the world in a new light. The realms of idealism and normalcy ceased to exist and I was able to see that by letting me treat her child the young lady had entrusted me with her most precious possession. No matter how obtunded my views were the mother’s love for her child and the child’s reciprocity in whatever means possible to him opened my eyes!

The child who could barely see and hear could sense that the center of his universe wasn’t in the room and his reaction was as normal as it could be – Panic!

I spent the half of my next day spending some time on the ward and observing Hanny and his family. His little sister came to visit him with their dad and showed off her drawings by dangling them in front of his face. His Gran brought him a big balloon and kissed him on his forehead as she left! Mum kept reading a magazine but every now and then her eyes would flicker towards her child.

In half a day Hanny had changed me from a ‘Baboon’ brandishing a stethoscope to a ‘healer’. I really needed to see for myself what he meant to his family and the only word that I could think of was “Precious” 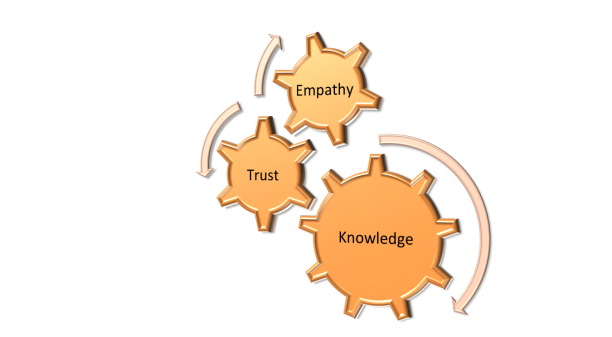 My motive behind sharing this story was to challenge your emotional side. We as physicians and caregivers need to realize the importance of human life and the need to preserve it with every ounce of strength and faith that we can muster. I solemnly suggest that we should make it a point to spend some quality time with our patients and see how a disease has affected every individual in a family and brought them closer. This is an exercise of your emotional quotient that no book or article would ever be able to replace.

Previous: Building and maintaining trust between Doctors and Patients
Next: Physician Dissatisfaction- A Prescription for your Doctor’s pain.