You are here: Home » Medical Students » The Pathogenesis of Addiction

“What fascinates me about addiction and obsessive behavior is that people who would choose an altered state of consciousness that’s toxic and ostensibly destroys most aspects of your normal life, because for a brief moment you feel okay.”- Moby (musician)

Addiction is the need to do something repetitively in order to attain a hedonic/ pleasure state. Addiction can be to substances like cigarettes, alcohol and drugs, or it can be to an activity like sex, violence or obsessive-compulsive behavior.

For a long time, various treatment models have been used to rehabilitate addicted patients in order to normalize their daily lives and bring them back to mainstream society. However, the views have now changed and after meticulous research, trials and experiments, new models have been hypothesized to understand the basic pathophysiology of ‘Addiction’.

Some of the most interesting and logical theories on addictive behaviors that we are going to discuss are the following:

In order to understand these theories we need first to look into the brain as to where exactly do the whole process of addiction start, how it progresses and what is the final outcome.

The reason why a person likes somethings and dislike others is because a section of our brain called the hypothalamus and the mesolimbic system detects it as good or bad. To keep it simple, we call this ‘The brain reward circuitry’ as it is a combination of various pathways aligned in a circuit that ultimately results in a reward like feeling. The interaction of the neuro-hormones and neurochemicals with the receptors is called the ‘The brain reward cascade’.

A complex interaction between various parts of our brain that ultimately results in a rewarded feeling is called the brain reward circuitry. The parts of the brain include the hypothalamus, the Ventral tegmental Area (VTA), Nucleus accumbens (NAc), amygdala and the prefrontal cortex. The interaction of all these areas ultimately end up in the secretion of the reward chemical called ‘Dopamine”. In short, this system is also called the ‘Mesolimbic system’ as it plays a significant role in our behavior and emotions.

Since it can be very difficult to grasp this concept, we will use certain interesting analogies to make it simple and easy to understand.

Let us give each participating neurotransmitter/ chemical a role in the drama we are about to present. 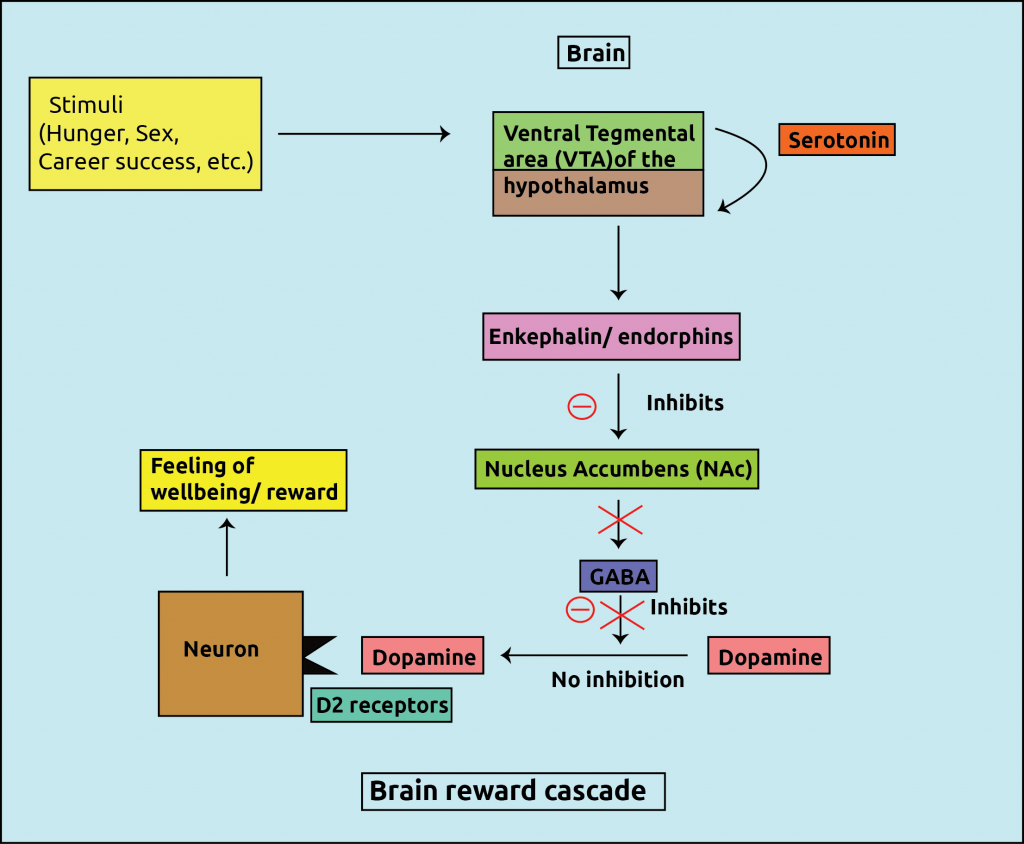 We as living beings on this earth were created to survive and progress. There would be no progress if there was no goal or motivation to achieve. Right from the most basic instinct like hunger, thirst and sex, the reward cascade plays an integral role in responding to these environmental stimuli (Troland’s concept of beneception). Any input from the environment is either received as a stressor or a pleasure. The key lies on the interpretation by the mesolimbic system. For e.g. A hungry person needs food to survive. So he hunts, cultivates or acquires food from the environment. On eating the food the mesolimbic system receives the message and secretes serotonin that in turn releases endorphins/ enkephalins. These enkephalins inhibit GABA thereby releasing Dopmine. Dopamine acts on the D2 receptors of the brain and gives a feeling of happiness/ satisfaction. This is the normal reward cascade present in every individual.

A. The reward deficiency syndrome2

Blum K, et.al discovered that addiction is not only an environmentally acquired process but also has a genetic link. They called it the ‘Epigenetics”. It is now considered that 50% chances of being an addict/ obsessive- compulsive are of genetic origin and 50% chances are by acquiring environmentally. A detailed research revealed that most patients addicted to drugs like cocaine, heroin etc., or chronic smokers or alcoholics and patients with ADHD, Obsessive- compulsive behavior, Tourette syndrome, Tics, and certain autism spectrum disorders like Asperger’s syndrome had a mutation in a gene coding for dopamine receptors D2 in the brain. This mutant allele was called DRD2-A1 variant (Dopamine D2 receptor Taq A1 allele). As a result these patients had 30-40% lower D2 receptors in the brain resulting in a functional dopamine resistance.3 Therefore, natural rewards (food, sex or success in career etc.) were not enough to generate adequate dopamine levels that would lead to a feeling of satisfaction. These individuals ultimately retort to using exogenous methods like drug use, alcohol, smoking or violence in order to bypass the reward cascade and generate significant amount of dopamine so as to attain normal satisfaction, leave alone pleasure. This is a vicious cycle as continuous use of these drugs leads to short lived dopamine burst followed by exhaustion of dopamine stores. This leads to relative dopamine deficiency which results in patient not liking the drugs anymore, but still has the need to take it just to feel normal. These patients also develop tolerance to these drugs and therefore need more and more of them in order to attain normal satisfaction.

The acquired causes of relative deficiency of these hormones (serotonin, endorphins and dopamine) can occur in states of stress, continuous failures in life or long term alcohol use. This also destroys the brain reward cascade and leads to addiction.

After the breakdown of the brain reward cascade, the natural rewards which could earlier influence the behavior are no longer effective. It takes a lot more than the natural rewards to motivate the patients and therefore they resort to more and more use of the abused substance. This change in behavior from simple rewards to aggressive need for the abused substance in order to attain normalcy is called motivational toxicity. This phenomenon differentiates people achieving euphoria from initial drug use (heightened reward cascade activity) from people chronically abusing the substance or people who are addicted to it to achieve normal satisfaction (blunted brain reward activity).

Incentive salience is another variant model described in people addicted to certain drugs. The paradigm shifts from liking a substance to wanting it. A person who has smoked cigarettes for years may not like it anymore but still feels the need to continue smoking. The reward which was earlier the euphoric feeling from dopamine release changes to intake of more of the abused substance. The brain gets sensitized to the drug and senses it as a reward. Therefore, liking is not a mere cause of addiction, it is the rewarded feeling a person gets by intake of the substance the strong wanting of the substance that drives the process of addiction. The strong desire to continue taking the drug is called the incentive salience i.e incentive to drink alcohol becomes salient to them.

This force is so strong that a person who has recovered from drug abuse after rehabilitation may relapse merely on the site of the drug/ its advertisement or even a single use post remission.

The management of patients with a certain addiction is no more considered a one dimensional approach. It now includes restructuring the brain reward cascade, increasing the reward hormone- dopamine or its receptors in the brain in order to decrease dependence on exogenous drug abuse and alternate ways like yoga, exercises and other activities to boost up the endorphin/ encephalin levels and serotonin and dopamine levels in the brain. Those with a genetic defect in dopamine receptors (reward gene) should be detected earlier and a multidisciplinary approach should be scheduled to prevent worsening and relapse of the addiction/ obsessive behavior.

The focus has now changed to alter the stimuli and the reward all together in order to rebuild the reward mechanism.

2015-09-14
Himanshu Deshwal- Assistant Editor
Share !
Dr.Harpreet Singh MD, FACP is a Chief Executive Officer and Founder of Vital Checklist and iCrush.org. The text, graphics, images, videos and other material contained in the videos and iCrush Website ("Content") are for informational purposes only. The Content is not intended to be a substitute for professional medical advice, diagnosis, or treatment. Always seek the advice of your physician or other qualified health provider with any questions you may have regarding a medical condition.

Dr. Himanshu Deshwal is a fresh graduate out of a reputed medical school in India, the Armed Forces Medical College, Pune. Dr. Deshwal is an active researcher constantly on the look out for projects that may help him hone his talents and abilities to the next level. Being an active sportsman he understands the importance of a holistic approach to healthcare and wellbeing. He has been a keen advocate of following an active lifestyle in midst of our busy lives.
Previous: IMPORTANCE OF EXERCISE
Next: Vital Checklist Mentorship Program