You are here: Home » Patient Experience » Building and maintaining trust between Doctors and Patients

Building and maintaining trust between Doctors and Patients

In today’s day and age of information technology and mass communication, there is a steady decline in trust between a doctor and his patient. Let us try and divulge the causes of this decline using this scenario.

A 46-year-old man anxiously waits in the sitting area, nervous about the encounter that lays ahead. He is contemplating replies to the barrage of questions that await him. He is worried that he might have waited too long. He is repenting his actions that have led to his condition to worsen to this extent!

Finally the moment of truth arrives and he walks into the examining room and meets Doctor ‘By-the-book’ MD. The Doctor spends 20 minutes with the patient – which is well above the frowned upon “15 minute” consultation. He “hears” the patient while he recounts his story, and goes through a set of questions that his medical knowledge forces him to ask. Then he discusses the ‘treatment options’ in a methodic way enumerating every drug and test known to mankind. He uses the phrase “Power to you” and asks the patient to make a decision. He even throws in a “I am there for you, if you have any concerns!”. He has done everything by the book, and is very satisfied with how he has dealt with- Wait! What was the patient’s name- Umm…. 46 year old man!

The Doctor did everything by the book , yet the patient felt cheated and confused. His days of anticipation had surmised to a page long scribble of his problems, with a box full of medications that he barely understands. Let us ask ourselves, where has the patient gone wrong? And how is Dr. By-the-book MD at fault?

There are numerous articles and studies that have emphasized on the importance of empathy and a healthy Doctor-Patient relationship. Why is it that all these studies and guidelines go ignored so frequently? Let’s try and find out.

I have brooded for hours at length, about the cause of suffering and pain. I have considered the possibility of a higher motive behind all the hurt in the world. I was surprised to find the answer of this question in my own suffering. When someone I love was in pain, I found a newfound compassion for all humans and their sorrows. While I hit rock bottom with failures and illnesses , I grew a healthy understanding and respect towards my fellow ‘human beings’.

Although it is very heavily emphasized right through medical school that there should be a ‘dialogue’ rather than a ‘monologue’ when communicating with any patient, I believe there is  a subconscious blocking of feelings at the level of the physician. Repeated exposures to stressful conditions and problems on a daily basis make a person harden and form a shell around his emotional self. The problem that ensues is that such a person becomes oblivious to the subtle nuances that point towards a fellow human’s concerns. The end result is that this person treats his fellow humans as “Humanoids” without ever realizing.

There is some fault on the patient’s part as well. He has walked into the clinic with stellar expectations. He wants an instant cure of a long-standing condition. And last but not the least- he does not communicate his concerns to his doctor and resorts to anger and frustration rather that having a fruitful conversation.

There is a huge hype over web based diagnosis advisory services that have affected trust between the Doctor and Patient. The patient fails to realize that a consult is a very intimate encounter where he shares his deepest secrets and seeks advice from a fellow human that has knowledge, which can help him. No matter how advanced science and technology get, they will never reproduce the judgment and cunning of a human mind. The Doctor on the other hand gets frustrated when his opinion is doubted because of a poorly directed web search.

Medicine is not a ‘job’, it is a ‘lifestyle’. We as Doctors should take every opportunity to learn from a patient encounter. It is surprising how frequently patients come close to diagnosing themselves and this is something that must be encouraged to a certain extent. After all, when has knowledge caused hurt? Doctors should try to direct the enthusiasm towards finding the correct source  of knowledge, which can help the patient battle his disease. 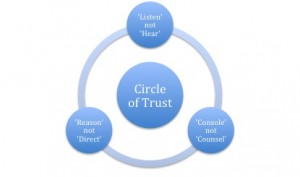 An Image depicting the Circle of Trust between Doctors and Patients.

‘Listen’ not ‘Hear’ to what the patient has to say, try and console the patient rather than giving blind advise and reason with the patient regarding treatment in place of giving orders.

This along with compassion and mutual respect for each other will lead to a long and healthy relationship, which both the Doctor and the Patient can cherish.

Previous: How to score good marks in USMLE Step 1?
Next: Cerebral Palsy- A cause of Plight and Unite