You are here: Home » Medical Students » Vaccines: The importance of a great discovery

Vaccines: The importance of a great discovery

In medieval times, infectious epidemics have run riot killing thousands of people. On instances, entire tribes were wiped out and lost with them were their traditions and cultures forever. The great epidemics of measles, smallpox and influenza, have killed more than half of population of many countries back then. Every year the deadly epidemics would recur in different parts of the world, taking its toll on human lives. No one had a solution to it.

As medical science progressed, the understanding of the disease and its pathogenesis became more unambiguous. The ‘why’ of our troubles began to surface. Since then, we have come a long way in the field of medicine. We are more prepared to fight back such epidemics and prevent loss of precious lives.  We have developed techniques to strengthen our natural defense and boost our immune system against these deadly pathogens. The best example has been the fight against smallpox. A successful vaccine campaign has eliminated the smallpox virus forever and saved millions of lives.

The Immune system- Our natural guard

The immune system of our body is one of the marvels that God has created. It starts right from the skin and body secretions and goes deep to our blood and bones. The skin protects us from the external environment and is the first line of defense against deadly pathogens. This is why an open wound is more likely to be infected as compared to a closed one.

Our saliva, the sweat and even the acid in our stomach, they all act as mechanical barriers against pathogens in our daily lives. However, as we have evolved, so have these pathogens. Some notorious ones have developed complex mechanisms to overcome these natural barriers and enter our body. This is where our specialized immune system comes in. It consists of the warriors (white blood cells) and their weapons (antibodies and the complement system.) 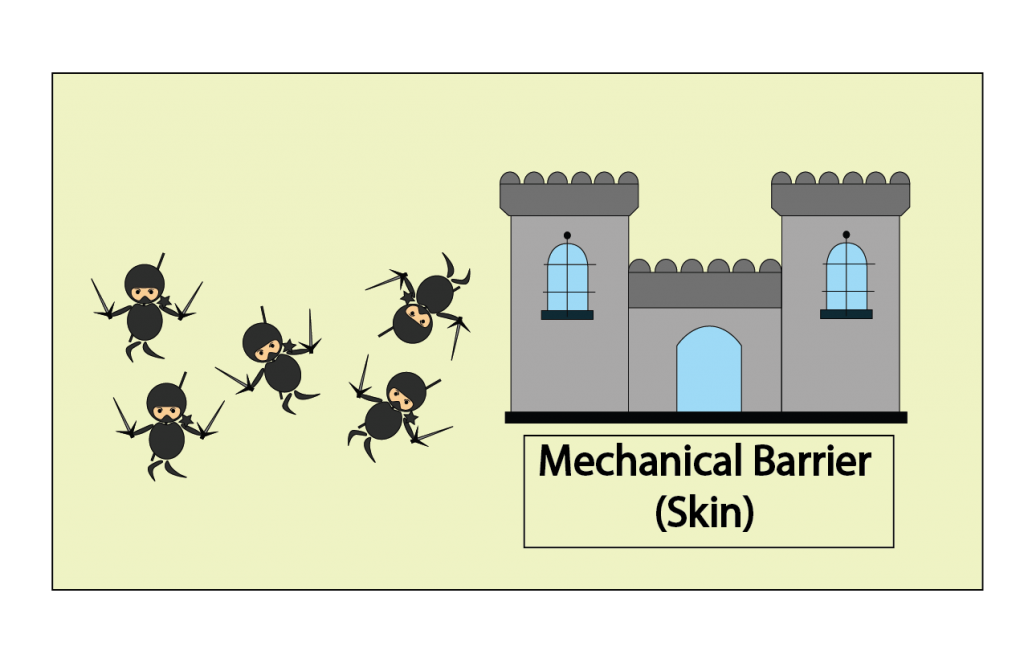 All the cells in our body have certain identifying markers (MHC I and MHC II) which the warriors recognize as friends and therefore does not destroy. However, when a pathogen enters the bloodstream, they are recognized by the immune system due to lack of these identifiers. As a result they are put to the sword, and are cleared up from the body, protecting us from the disease. This is called the innate immune system. We all are born with one and is similar in all human beings (except certain immunodeficiency syndromes). 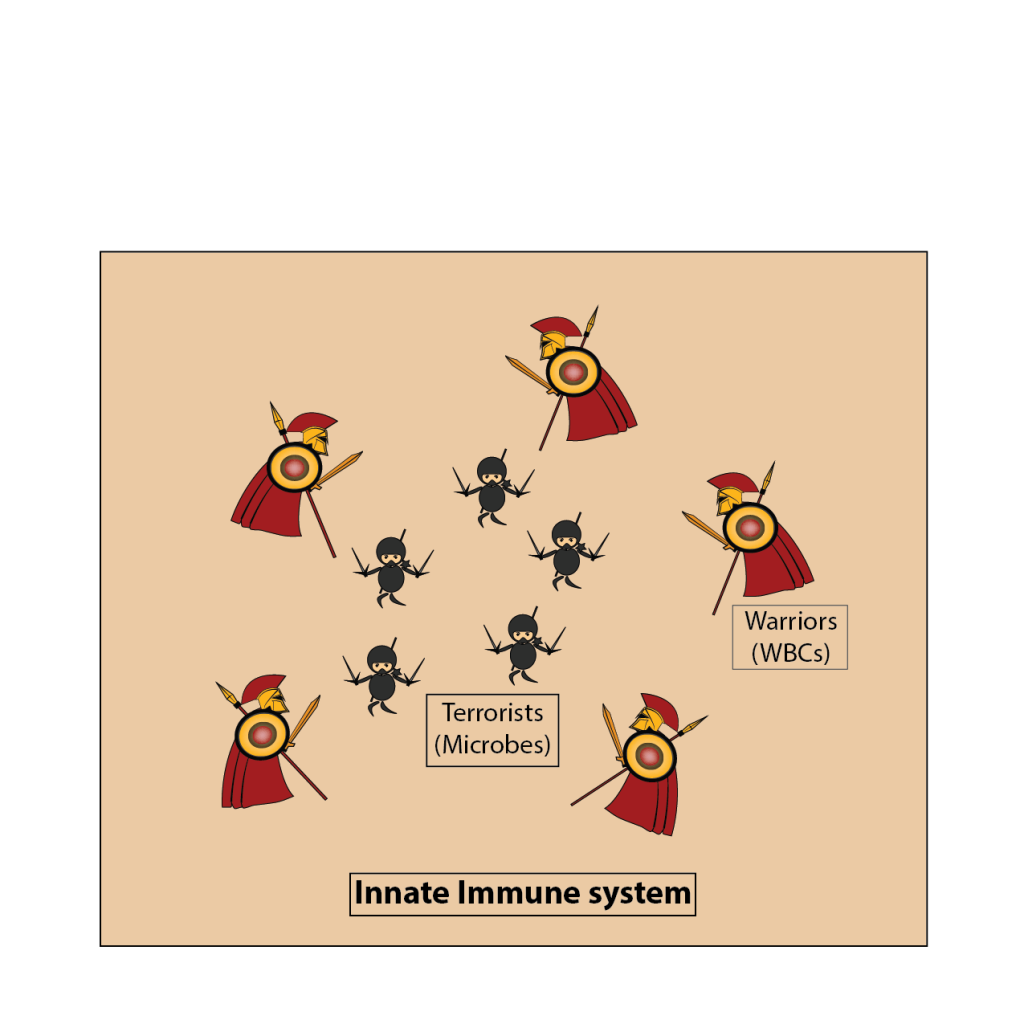 The story does not end here. Due to a state of continuous war, our immune system, as well as the pathogens, have been evolving with more sophisticated mechanisms to fight each other. Some pathogens are successful in fooling the defense by hiding inside the cells or masking themselves. In order to combat these advanced terrorists, our warrior cells detect certain antigens located on these pathogens. Thereafter, they undergo genetic modification (V-D-J recombination) forming weapons (antibodies) that are very specific in recognizing and incapacitating these terrorists. Once they are captivated, the warrior cells devour them, preventing the disease from happening. This type of adaptive mechanism is known as the adaptive immunity that we develop individually based on the type of infections we come across. Therefore, a particular population of people in a certain region of the world will have a different adaptive immunity as compared to another population living in another part of the world, depending on the types of infection they are exposed to. 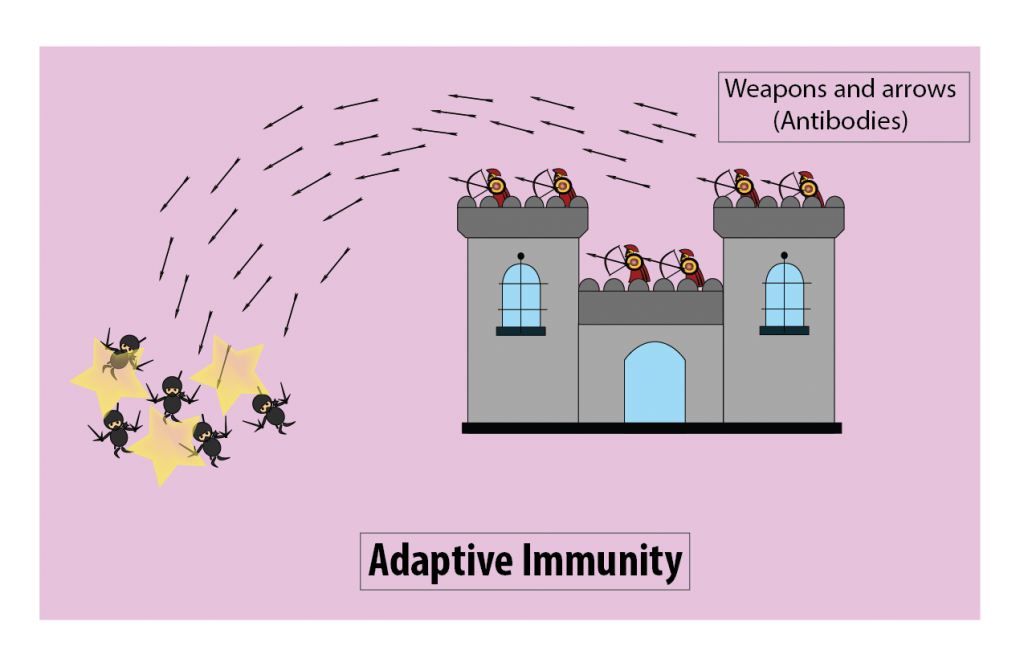 Sometimes, like a blessing we receive these weapons from our parents and forefathers, based on their encounter with these infections. This is called the passive immunity. This explains why newborn are protected against diseases like measles for the first six months of their lives as antibodies against measles are transferred from the mother to the baby while in the womb. Once these antibodies start to clear up, the immunity against these infections decreases making the child prone to infection.

Some infections attack in a very powerful way. They come like a storm and overwhelm the immune system. Unable to fight such a scathing attack, the whole machinery may collapse leading to disease manifestation. This may have two outcomes. Either, the immune system regroups, reassembles and fights back, gradually clearing the infection, or it totally crumbles leading to the death of an individual.

The advanced weapons- The vaccines1

Some 300 years ago, when little was known about the immune system, Edward Jenner, an intelligent country doctor in England had noticed a few incidences that changed the history of medicine forever. He had observed that in a local community of farmers and milkmaids, where cowpox infection was common, the incidence of smallpox was markedly low. Whereas, in the rest of the country, smallpox was a lethal epidemic killing many people. He thought that the cowpox was giving some form of protection against the disease. Jenner being a more educated, unorthodox and scientific person, pursued his observation and carried out one of the first ever clinical trial in the history of medicine. He first inoculated an eight-year-old boy with the pus collected from a patient suffering from cowpox. Six weeks later, he inoculated smallpox into the boy’s arm and surprisingly the boy did not develop the illness.2

He then carried out the trial on many other people, and as expected, the incidence of smallpox began to decrease significantly. This way, the first ever vaccine was discovered and till today has saved millions of life from many deadly infections.

As investments began to pour into the field of immunization, the concepts of immunology started changing. Years later, it was realized that our immune system had developed the immunity against the cowpox virus that also protected us against smallpox. Using this concept, scientists and doctors started isolating bacteria and viruses, inactivating them, killing them and making them harmless using various techniques. These products were then used as bait for the immune system to wake up and get activated against these antigens and form a strong defense by producing antibodies. Now, whenever, a vaccinated person gets exposed to the real deadly microorganism, their immune system recognizes it and can fight it and protect the body from illness.

Vaccines are therefore the most impressive and efficient preventive measure for an infectious disease known to mankind. They come in various forms ranging from antigens (part of the bacteria/ virus), heat killed/ inactivated bacteria/ virus or live vaccines containing live organisms without the capacity to cause the disease.

The fear of vaccines

The vaccines, therefore, have significant benefits in reducing mortality from these infectious diseases. However, like any other pharmaceutical drug, they also come with certain side-effects3.

Recently, there was much hype about certain reactions arising from the use of vaccines, which led to a widespread uproar and shunning the use of vaccines. These included rumors of Measles vaccine causing autism and inflammatory bowel disease. The infamous Wakefield study4, which suggested that use of measles vaccine (MMR vaccine) was associated with increased risk of autism spectrum disorder and inflammatory bowel disease created a huge controversy and led people to discontinue prophylaxis program5. As a result, there was a recurrence of measles epidemic in children who did not receive the vaccine.

The study was later found out to be fraudulent and biased and was therefore retracted6. There have been complicated theories on how the study was done for a secondary motive and unethical issues. Recent studies done on MMR vaccines showed no association of increased risk of autism and, therefore, contradicts the original study that created the hue and cry7, 8.

Since, modern medicine is now evidence-based, one should trust the hard work of health care professionals and scientists who have contributed magnanimously in the field of research. Vaccination thus certainly has more benefits than risks and should be continued to decrease the incidence of infections that once endangered our species. Ignoring the greatest discovery in preventive medicine would be lethal to our current and future generations.

2015-09-01
Himanshu Deshwal- Assistant Editor
Share !
Dr.Harpreet Singh MD, FACP is a Chief Executive Officer and Founder of Vital Checklist and iCrush.org. The text, graphics, images, videos and other material contained in the videos and iCrush Website ("Content") are for informational purposes only. The Content is not intended to be a substitute for professional medical advice, diagnosis, or treatment. Always seek the advice of your physician or other qualified health provider with any questions you may have regarding a medical condition.

Dr. Himanshu Deshwal is a fresh graduate out of a reputed medical school in India, the Armed Forces Medical College, Pune. Dr. Deshwal is an active researcher constantly on the look out for projects that may help him hone his talents and abilities to the next level. Being an active sportsman he understands the importance of a holistic approach to healthcare and wellbeing. He has been a keen advocate of following an active lifestyle in midst of our busy lives.
Previous: USMLE Step 2 Clinical Skills Exam- My preparation experience
Next: IMPORTANCE OF EXERCISE